Every once in a while a book like Kleptomaniac: Who's Really Robbing God Anyway challenges us on what we think we know or have been taught. On the subject of tithing, many people have opinions, thoughts and interpretations about what tithing means in the Bible, but rarely have people done a complete empirical study on this biblical practice from eons past and its requirement in the New Testament Church. Some believe that the most effective way to teach tithing is to interpret it as paying a tenth of income to the church in perpetuity. Certainly no other biblical doctrine has caused such consternation as when monetary tithing is challenged. Therefore, Kleptomaniac: Who's Really Robbing God Anyway deals, not with theories and opinions about monetary tithing but with well-proven theology, scriptural principles, hermeneutical facts and the Hebrew language to define what tithing really is and is not in the scriptures.

KLEPTOMANIAC: Who's Really Robbing God Anyway is a trek through the pages of the Bible to find the untwisted truth about the centuries-old teachings on tithes and offerings. Every page of this informative tithing masterpiece has indisputable evidence about tithing that will make you become an analyst in getting to the bottom line of what tithing is in the Old and New Testament. It takes you on a journey to first define the word tithe and then breaks down the differences between giving and tithing as the Bible instructs. The author Dr. Frank Chase Jr attempts to expose what most people believe as fact to bring them to what the Bible actually teaches when it comes to true giving. Are the arguments put forth today about tithing fact or fiction?  Monetary tithing has been taught as an undisputed fact in churches for centuries. Kleptomaniac: Who's Really Robbing God Anyway challenges that assumption and puts modern tithe teachings under the microscope of scripture.

Kleptomaniac: Who's Really Robbing God Anyway? The Untwisted Truth About the Centuries Old Tithes and Offering Deception examines the history of church tithes, a practice from the early days of Christianity which takes a darker turn as its history and connections to actual Scripture are probed from its original applications to modern times to uncover how God's authentic tithe went from crops to cash as fundraising effort religious. 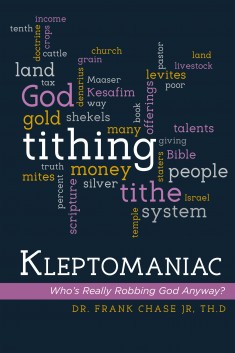