In Harry Heron: Savage Fugitive, Book Four of the Harry Heron Series, Harry and Ferghal lead a band of fugitives of the Fleet in a battle against the Consortium on Planet Lycania inhabited by the very canine-like Canids.There are three things you need to know about Harry Heron and Ferghal O'Connor: *Born in the late 1700s, they catapulted through time and space from the gun deck of the HMS Spartan during a sea fight with the French in 1804 to the starship NECS Vanguard in 2204. *Best friends since their boyhood in Ireland, they're smart, savvy, and fearless, as loyal to each other as they are to the British Royal Navy and the North European Confederation Fleet. *A juggernaut of wits, wit, and boundless energy, they show the twenty-third century how it's done when it comes to outwitting the Consortium, navigating any type of ship, and harnessing artificial intelligence to their keen advantage. 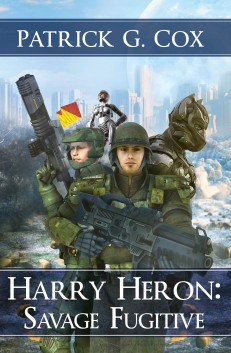