Sherlock Holmes And The Strange Death of Brigadier-General Delves

It’s 1898. Kismet brings about a chance reunion at a London club between Dr. Watson and Colonel “Maiwand Mike” Fenlon, former military comrades from their Northwest Frontier days and the desperate Battle of Maiwand. A week later an urgent cable seeking Sherlock Holmes’s help arrives from the Bailiwick of Guernsey, a British Crown Dependency 30 miles off the coast of Normandy. A retired high-ranking British Indian Army officer who commanded the troops at Maiwand has dropped dead. Colonel Fenlon is in a holding cell awaiting trial for his murder.

What role in the Brigadier-General’s death was played by a phial of patent medicine developed in India to treat cholera? Why are Colonel Fenlon’s forefinger and thumbprint on the neck of the phial when he swears he has never seen it before?

Above all, why is Fenlon refusing to enter a plea or even to tell his Defence counsel what took place the evening the Brigadier-General dropped dead? 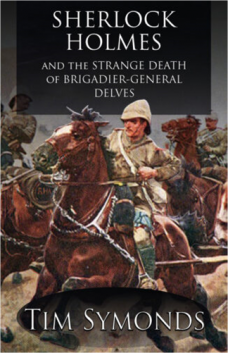