A KIDNAPPED PRINCESS.
THE ANDROMEDA GALAXY'S MOST FEARED MERCENARY.
AN EVIL EMPIRE ABOUT TO BE BORN.

The Princess Rhiannon of Salacia has been kidnapped and is being held for ransom on the fortress planet Nammu. Galen Dwyn, the most feared mercenary in the Andromeda Galaxy has been hired to rescue her and bring her home.

But even as his rescue mission succeeds, Galen will soon find himself on the run with the Princess. Caught in the middle of a web of political intrigue, even as he begins to fall for the Princess, he will have to use every ounce of his skill and cunning to keep them both alive as forces from several planets seek them out.

For her love, he will stand alone against the forces looking to establish a new, and very evil, empire.

Galen will look to keep her safe and bring the budding empire to a halt before it can gain a foothold in the galaxy. He will choose to do so the only way he knows how.

Dragon Award finalist Richard Paolinelli takes us on a grand adventure in this Space Opera offering set in the first book of the Starquest Saga. Set in the 4th age of Dragon Award winner John C. Wright’s Starquest universe that will feature several books by Paolinelli, Wright, and other authors in the months and years to come. 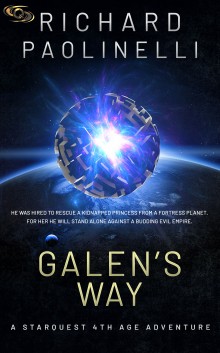