A Second in Eternity

A Second in Eternity is the true story about the author’s 1977 "near-death, out-of-body" experience, one that changed his life forever and still inspires and empowers him to this day.

Over the course of a day or so, Mr. Wimmer found himself becoming increasingly more psychic, minute-by-minute and second-by-second, able to see, feel, and know things, especially the immediate future, at will and with uncanny clarity. Within days, the intensity escalated to the point where he could no longer remember what 'normal' life was like.

After a week of experiencing such phenomena non-stop, while pacing down a crowded sidewalk, he was involved in a head-on collision with a speeding car.

He instantly left his body, felt amazing bliss, and witnessed the accident from above while expanding outward in all directions, like the surface of a balloon being instantly filled with air. Losing all sense of a personal self, he experienced ecstasy and beauty beyond description for what seemed like an eternity, then returned to his body, sprawled out on the chaotic street.

Still, he clearly realized what had happened. He was gone from my body for only seconds of Earth time, but for what seemed like an eternity in the highest of dimensions.

A Second in Eternity takes the reader on a vivid voyage through the mind and soul of one becoming overwhelmed by psychic phenomena. It describes the onset and escalation of the unfiltered perception that takes over when the wall that usually separates the conscious and subconscious minds begins to dissipate. This story reveals the steps I went through in unknowingly going from normal everyday consciousness to dimensions and worlds beyond imagination, to being at one with the Infinite, and to returning back to the world of space and time on Earth... as a different person.

A Second in Eternity contains the remaining paperwork and copies of the original police and court reports taken from microfilm, but with all the names blocked out for privacy concerns. 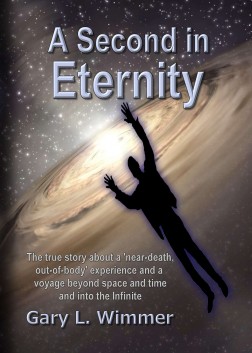