The Secret Life of Captain X: My Life with a Psychopath Pilot

The Secret Life of Captain X: My Life with a Psychopath Pilot

A brave and compelling memoir written to raise psychopath awareness!

Her marriage to successful airline pilot Captain X seemed like a dream come true. In reality, it was a nightmare. She ignored the red flags, the marital abuse, continually hearing, “You’re so lucky to be married to him!” Lacking empathy and putting them in serious debt, he promised to fix things but instead divorced her. When she uncovered his involvement with prostitutes and his sexual addiction, he left taking their only child, leaving her a victim of Parental Alienation Syndrome (PAS). The horror ends when she realizes he has an antisocial personality disorder. He’s a socialized psychopath (also known as sociopath.) Left with post-traumatic stress disorder, she moves far from him all while trying to get her child back into her life.

When people think of psychopaths they think of violent criminals. Most psychopaths are not criminals but rather socialized and living among us. Since experts estimate as many as 4% of people are psychopaths, the chapter titled Understanding & Avoiding Psychopaths helps readers recognize and avoid these untreatable social predators who have no conscience. A final chapter, Suggested Reading and Viewing, provides readers with resources to learn more about psychopathy.

Aftermath: Surviving Psyschopathy Foundation gave The Secret Life of Captain X: My Life with a Psychopath Pilot a rave review. They feel it is  a "MUST READ  for those wishing to understabd the behaviors which accomany psychopathy" and may help others in their recovery process. 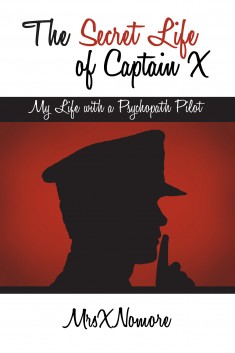