The year is 2202, and the recently widowed Captain James Heron is appointed to stand by his next command, the starship NECS , while she is being built. He and his team soon discover that they are battling the Consortium, a shadowy corporate group that seeks to steal the specs for the ship’s new super weapon. The Consortium hires the Pantheon, a mysterious espionage agency, to do their dirty work as they lay plans to take down the Fleet and gain supreme power on an intergalactic scale. When Pantheon Agent Bast and her team kidnap Felicity Rowanberg, a Fleet agent and friend of the Captain, this clash of titans becomes personal. Bast is an expert in bio-disguise and evades several traps as Fleet Security close in. The Captain honors his oath to the Fleet and his growing love for Felicity, and takes decisive action to thwart the Pantheon and protect Felicity at all cost. When you read the explosive final pages of , you will be on the precipice of where Captain Heron’s story picks up in , when he comes face to face with his twelve times great uncle Harry, who lands on the deck of the in the year 2204 straight from a wooden wall sailing ship amid a sea battle with the French in 1804. 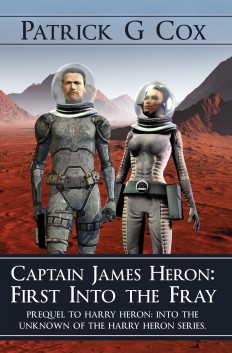