The Liberty Bell Files: J Edgar's Demons is a work of fiction...seriously. Neither the Liberty Bell Project nor "the Files," nor The Special Projects Division of the Federal Bureau of Investigation ever existed. Can you imagine the FBI investigating a guy who didn't want to pay sales tax on a cup of coffee? Or a guy who somebody thought wrote a story disrespectful to the Japanese? Or a prostitute calling herself Karla Marx, who advocated revolution by sex? No one would authorize time and resources for such things. But, just for the sake of argument, let's say...

Dave Clawson of Hell (Michigan) might have started his FBI career with the Special Projects Division fresh from the Academy-the non-existent SPD. Inside the DC Beltway, questions about the SPD might be met with a puzzled-puppy expression or a quick wave of the hand and a dismissive, "that old Hoover myth? Fuhgeddaboudit, Mack." The SPD might have had had a centuries-old mandate from the Commander-In-Chief himself for tough, nasty jobs no one else can handle.

The Liberty Bell Files--if they existed--might have covered a full spectrum of humanity, from the wholly benign to the horribly malevolent. A good 99% of them would have been about people and groups that were, at worst, harmless crackpots or who just had a different way of looking at life-harming and threatening no one. One might have had to do with an overweight cat; another, an IRS-certified "church" that "worshiped" that relaxing nap after you-know-what. The remaining 1% might have been-and possibly still could be downright scary. Some people in those files could have killed federal agents; some could have blown up buildings, their mysteries "solved" somewhere...maybe. To find those bad ones, the SPD's imaginary agents would have had to wade through the harmless, the bogus, and the weird.

So help me, Hanna 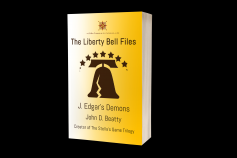